Life on the farm was driven by the constant demands of weather, work and weariness, but once a year the family would be loaded into the 1960s sedan and driven full tilt to the Florida Car-O-Tel at Miami Beach on Queensland’s Gold Coast. 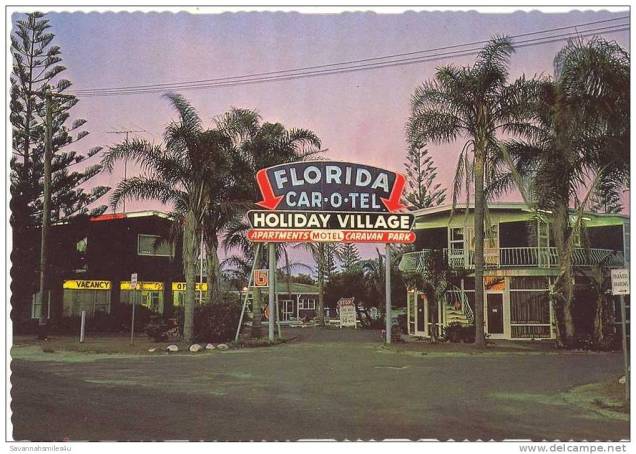 The sense of anticipation was such that the whole family was fired by an unusual sense of excitement and energy. Even my normally calm and reserved father would have a spring in his step as he headed towards the shearing shed.

Preparations would start weeks in advance with packing and sorting clothes, but how much do you really need when you wear swimmers and go barefoot for three weeks? My mother had standards and they had to be adhered to.

Food was planned and the old tartan-patterned, metal esky would be dragged out of the laundry cupboard and dusted off. Our fringed towels would take pride of place in the packing pile on the back verandah and the tube of white zinc, thick and smeary, retrieved from the back of the bathroom cupboard.

It was hard to sleep the night before the big trip because it was THE trip of the year and you knew the night would be short anyway. Why bother to sleep?

Around 2 a.m. my father would gather up our groggy bodies and lay us in the back of the car. Me, being the youngest, had a bed made of pillows on either side of the large, immovable hump on the floor of the car. My brother was given the whole back seat. Seat belts? Who needs them?

Off we would shoot into the Dubbo darkness – us kids oblivious to the exhaustion our parents must have been feeling.

At some stage after the sun rose we would stop for mutton and peach chutney sandwiches – white bread of course – and my parents revived themselves with a thermos of tea.

The drive continued, seemingly without end and the passing scenery simply did not rate against the anticipated destination.

We fought. He punched me, I pinched him. “If you keep this up you can get out and walk.” “If you keep this up, we will just turn around and go home.” These threatening statements bought a short reprieve for my parents from the endless backseat antagonism.

We slid across the vinyl bench seats as we whirled around mountain corners. We marvelled at the coastal eucalypts – so tall and straight – and made comments like “Gee Dad, you could build some good cattle yards out of those trees”. Yes, out of the mouths of bush babes.

We built barricades between ourselves to head off further pinching and punching. We had Marella Jube eating contests where we jammed as many hard jubes into our mouths as we

could fit and slowly tried to chew. At least it would have been quiet – temporarily – for Mum and Dad.

At last the Gold Coast loomed. We wound down the windows and heard the bellbirds ring true and clean as we descended the mountains and the competition began as to who would be first to see the sea. Any trick in the book to distract two tired and restless kids locked in the car for the past 12 hours.

I’m unsure who was the most relieved to see the glowing neon of the Florida Car-O-Tel – us kids tasting freedom at last, or our parents, who knew they wouldn’t see us again for three weeks!

Each year we were greeted by the latest version of the resort owner’s Labrador dog. We aged with those dogs and any momentary sadness at an old dog’s passing was soon offset by the excitement of a new, younger model to play with. Similar, the parade of seasonal visitors or almost permanent residents. We met up with Mr and Mrs Janz each year and I doubt whether they actually ever went home to Melbourne. True sun worshippers, they had deep brown, leathery skin – slick with coconut oil – which made it difficult to tell their true age, although I suspect they were younger than they looked.

Three pools to choose from, trampolines to injure yourself on and the beach on the other

side of the trees. For the inevitable wet day there was a games room with indoor croquet, ping pong and carpet bowls but usually also with one or two pieces of vital equipment missing. A raggedy pin-board held the rare, but longed-for, letters from your best friends at home and some lean-to bookshelves held the world’s largest collection of dog-eared Readers Digest magazines. Of course, none of these indoor delights rated in comparison to sand and sunshine.

Friday was treat day. A small shop to buy Clinker lollies and mango or rockmelon Weiss bars. A tiny fish and chip shop to lash out on hamburgers (real ones with the lot) or potato scallops that burnt the roof of your mouth.

Collapsed onto the divan bed at the end of each day with remnant white zinc on my nose (if Mum had caught me to put it on in the first place) and my skin still warm from the day’s rays, I drifted off to sleep believing that there was nowhere more heavenly than this.

6 thoughts on “A Long Road Trip Down Memory Lane”