Since 2013 I have walked three caminos, all concluding at Santiago de Compostela in north-west Spain. The ever-popular Camino Frances was my introduction to the wonderful world of long distance walking. Bitten by the bug, I returned to Spain for the Via de la Plata from Seville in 2014 and then stepped out on my own on the Camino Portuguese from Lisbon in 2016.

With all those caminos under my belt I thought it was time to break out of Spain (J) and, for something different, last year I walked 1046.9km through Italy on the Via Francigena.

But what is the difference between the two? And which is the right one for you?

There are some stiff climbs on the caminos I have completed, however I estimate that there would be 40% more ascents on the Via Francigena and generally, the ascents would be substantially steeper and more taxing.

The path underfoot in Italy is a good mix of dirt back roads and some forest paths, although, I estimate 80% of the route in Italy was on asphalt or other hard, manmade surfaces of some sort. Other than the Camino Portuguese, this was significantly more than the Spanish caminos.

Also, I think because the caminos are much more popular and busy, the local associations and support groups make a greater effort to reroute walkers away from the main thoroughfares. On the Via there are some long (sometimes around 10km) and unpleasant sections on the edge of busy roads with no verge, which really put a dampener on the enjoyment of the day’s path.

In the north of Italy, the distances between the towns and villages would be comparable to the Via de la Plata. There are some days in both walks when you have to walk +30km to get from accommodation to accommodation. The Via Francigena path can take you through some sparsely populated areas and public transport may be non-existent. Some people I met along the way split long section of the Via by staying in agriturismos (farm houses) or by pre-arranging a taxi pick-up. This takes a little more research and planning. 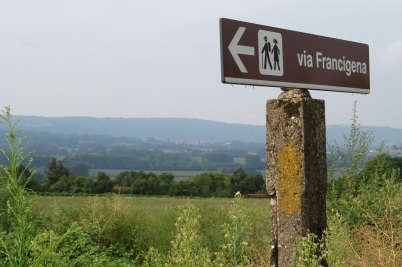 The quality of waymarking varies a bit through Italy, but overall it was very good. When I walked the Via de la Plata in Spain, I experienced many days when the signs/arrows simply disappeared. Perhaps this has improved since 2014.

Because the Via Francigena is substantially less popular or well-developed than any camino, there are few private ostellos (equivalent to albergues). The main source of cost-effective accommodation is in monasteries and convents who provide a simple, but warm welcome. Please note that often accommodation places are not permanently staffed or may be staffed by volunteers. I recommend you book ahead so they know you are coming. I found this to be quite different to the caminos where the albergues seemed to be open all the time and, as many of them were private businesses, it was in their interest to be open and waiting for pilgrims to arrive.

Both Italian and Spanish food are delicious and readily available. ‘Pilgrim’ menus are not common in Italy however some cafés and osterias offer fixed price menus for lunch and dinner for around €12-15.

In both countries, fresh food street markets and supermarkets are plentiful and economical options for those people who like to eat simply.

Many bars in Italy are open very early in the morning and provide delicious coffee and fresh pastries to fuel up on before you set out. Up north, coffee and a donut or croissant cost around €2, however it seemed to get more expensive in direct relation to the size of the town as I travelled southwards.

As you may have worked out by now, I tend to eat and sleep simply so my average daily expenditure tends to be around €20-25 in Spain and €25-35 in Italy. In Italy, sometimes it is necessary to stay in a small hotel if an ostello/convent bed is not available and that can blow the average out a bit.

Unlike the caminos, the Via Francigena is very quiet. I walked late Summer and sometimes I would walk all day and not talk to (or see) a soul and then later, I could be the only person in the ostello at night. I did meet some wonderful fellow walkers as I journeyed south and they certainly brightened my day.

Having said that the local people were very friendly and supportive of walkers. The Via Francigena is not as well known amongst Italian people, but everyone was very welcoming.

English is not as widely spoken in Italy, especially in the north of the country. It is the right thing to do to learn some basic phrases in either Italian or Spanish depending on the walk you are planning. It will make your life a whole lot easier and is a sign of respect to the local people.

Although there are less people undertaking the Via Francigena, it has some excellent supporting resources, just like the most popular caminos. Certainly the Via Francigena app is a superior navigational tool and I will be searching for something similar when I walk in Spain again.

Like the Compostela you receive in Santiago de Compostela, you finish your Via Francigena adventure by collecting your Testimonium at St Peter’s Basilica. A word of warning though, the reception I received at St Peter’s was lukewarm to say the least, perhaps ‘indifferent’ is a better description. Other than walking into Rome with some very special people, there was little sense of celebration or achievement provided by anyone else, other than ourselves. It has a completely different atmosphere. You are swallowed up by, and lumped in with, the other thousands of tourist milling around the square. Make sure you pause for a moment and pat yourself on the back.

Overall, I found the Via Francigena a much more challenging and physically demanding experience. It was wonderful and amazing and I am glad I did it, but I am still trying to work out whether I ‘enjoyed’ it. Enjoyment may not be the right word. Maybe if I had had a walking companion it would have been a more enjoyable experience and the good and bad times could have been shared and halved.

So, which would you choose to walk?

17 thoughts on “Spanish Camino or Italian Via Francigena – which one is for you?”