If you are visiting Sydney and feel the need to escape the towering buildings and concrete jungle, then include this short stroll on your itinerary. It is sure to blast out the cobwebs with salty, sea air.

The Barangaroo area, located right on the western edge of the Sydney CBD, has been a construction dog’s breakfast for years. While it is still dominated by the massive Crown Casino development site complete with unpleasant smells (old gas works), noise and dust, the area is slowly emerging into a beautifully landscaped reprieve from the City’s hustle and bustle.

Walking in a northerly direction from Darling Habour with the water on your left, the surrounds change from the chic eating and drinking establishments of Cockle Bay Wharf, past the building sites and finally transforms into the multi-coloured sandstone layers and native shrubs of the Wulugul Path.

The path gets its name from wulugul, the local indigenous word for kingfish, a highly sought after catch for Aboriginal people long before Europeans arrived. The wulugul/kingfish has a golden band along its body, a nice nod to the striped sandstone that is so prominent everywhere on this path.

At the start of the path there is a short, 10-minute video, Wellama, explaining the origins of the Gadigal people and their enduring connection to the harbour and the surrounding lands. The video explains that, “the film and the concept around it is about a loop, so the film itself doesn’t have any beginning, middle, or end and it plays with the Aboriginal notion of time, the idea that time is cyclical, that 65,000 years exists right here, right now.” A thought-provoking concept.

I find Sydney is always more manageable and enjoyable when I am beside the water. The views are spectacular, even on a chill Winter’s morning. Wherever you look there is a stunning view of the Harbour and its many bays and inlets:

The sound of the seagulls, the briney smell and the sight of the passing ferries all make for a relaxing stroll. Interpretative information along the path describes some of the landmarks and the native flora and fauna, so it is educative too. I was surprised there weren’t more people out on the path, but perhaps I was too late for the joggers and too early for more laidback visitors and tourists. 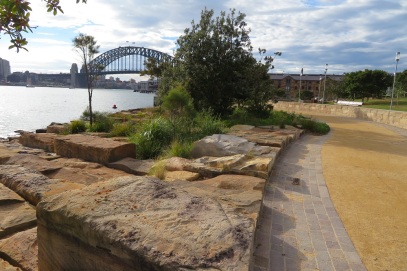 Working my way around the shoreline, the focus changes from indigenous history to the early colonial history and the important role this section of the Sydney Harbour played in maritime history. Due to the depth of the water in this area, it became the main shipping and transport hub with large finger wharves constructed to process all the goods.

Unfortunately due to neglect and the ‘pursuit of progress’ some of the early maritime buildings fell into disrepair and were demolished, but thankfully a handful of the finger wharves have been preserved. They are now home to groovy eating, sleeping, working and performance spaces, and many are open to the public to explore. It is wonderful to see the massive wooden piers and beams still in place and I can almost hear the raucous noise of a working port. If you are interested in learning more about the area, download the heritage walk map. 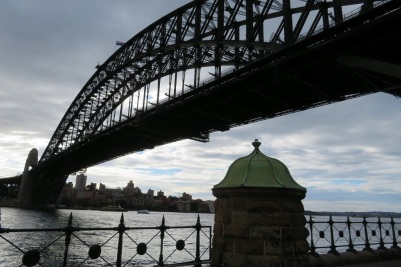 As the path points further East, the iconic Harbour Bridge looms large. Its silhouette against the grey morning skies makes it particularly imposing above the busy waterway.

And then there is the ‘big reveal’ as you pass under the Bridge and round the bend towards Circular Quay. You are definitely back in the City again and amongst the crowds surging to the Rocks, Opera House and Circular Quay ferries.

The brief respite is over, but it was nice while it lasted. An enjoyable dose of indigenous and colonial history and bracing fresh air. The perfect way to start the day.

What short walks in Sydney do you recommend?

What: The Wulugul Path is a celebration of both indigenous history and early Australian white history with spectacular views to match.

Where: When the whole of the Barangaroo precinct is finished in 2024, the Wulugul Walk will follow the complete 2kms of foreshore from Darling Harbour to Walsh Bay.

When: There are no gates and it is well-lit, so the path is accessible at any time.

Why: To see Sydney at its very best.

Who: Most of the path is flat and smooth and would be easily accessible by wheel chairs and strollers. It would be perfect for children to burn off some energy, but the water is not fenced off. Keep an eye on them!

Related Posts: For more strolls along Sydney’s coastline, have a look at my post covering the path from Bondi Beach to Coogee.

Related Blogs: To learn more about the history of Aboriginal people in the Sydney area, check out this website.

Read About It: For an enjoyable read about this part of the world and early European settlement, have a read of Kate Grenville’s, The Lieutenant. Based on real events, she describes the establishment of an observatory on the edge of the harbour and the interaction with the local aboriginal people. Available from Book Depository.

9 thoughts on “Escape Sydney’s Concrete Jungle on the Wulugul Walk!”