When visiting Outback Australia on the cusp of Summer, it pays to get outside early and then disappear inside under an air conditioner for the rest of the day.

That was our plan when we signed up for the Broken Hill Heritage Walk Tour.

We are both very partial to a walking tour as the Husband and I find it is the perfect way to do a deep dive into the history of the place. What we weren’t expecting with this tour was a virtual deep dive down a silver mine! 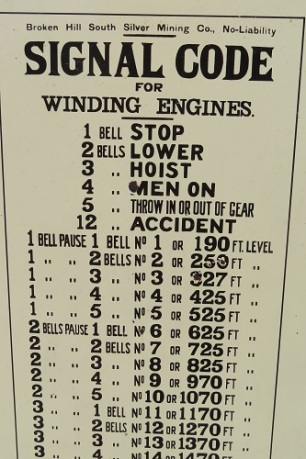 Don, our guide for the day is a Broken Hill lifer and spent his entire working life, underground. His passion for the town and the industry shone through and I learnt more about silver mining that I ever thought I needed to know including the technical aspects of how silver was, and is, mined and the equipment involved. Don was adamant that miners need brains AND brawn to survive underground and, as he explained the many risks and numerous deaths that occurred in the early days, we understood why brains would come in fairly handy.

The silver ‘line of lode’ was discovered in the area in 1883 and the famous Australian company, Broken Hill Pty Ltd, was established in 1884. By the end of 1900 the value of silver mined by this company alone was estimated at £45million! A rough conversion equates that to AUD$50,580,000,000 in today’s money. For those of you like me, who are dazzled by all those 00000, in words it equates to fifty billion five hundred eighty million dollars! A stupendous sum to generate in six short years.

While we weren’t expecting the comprehensive mining education, we soon realised that Broken Hill and mining are inseparable. There is barely an aspect of Broken Hill society and economy that has not been touched by mining, and the substantial wealth generated by the mines made Broken Hill what it is today.

The walking tour departs from the Visitor Information Centre and covers around four large blocks of the Broken Hill CBD. That doesn’t seem like a great distance, but the sights and history crammed into that small area is enough to satisfy the most passionate history buff.

The history of unionism in Broken Hill was both fascinating and a bit scary. Don described the supreme power of the unions and how they could make or break a business or bring the entire town to a standstill. The unions decided who could work and when, and banned all women from working once they married. I don’t agree with the wielding of that sort of power, but no doubt they had a substantial impact on safety and other conditions for workers.

As the tour progressed through the streets, we found ourselves hiding in any patch of shade we could find. Even though the tour started at 10am, the sun was biting and we wilted as the temperature climbed. In fact the Visitor Information Centre cancelled the tours for the rest of the week as it was deemed too risky to be strolling the Broken Hill streets in 43°C heat. I tend to agree.

If you can’t coordinate your schedule to join the guided tour, self-guided maps are available from the Visitor Information Centre and interpretative signs are plentiful throughout the Broken Hill CBD. At least you could do those tours at 6am before the heat really kicks in!

Overall, the tour was an enjoyable and enlightening experience. You can’t beat walking the streets with a local person passionate about their town’s history, but also happy to share their thoughts and comments about modern day Broken Hill. In the last 20 years or so the town has shrunk from 35 000 people to around 18 000 and you have to wonder how such a remote, mining-dependent community can maintain its relevance and provide a future for its children. I am guessing that tourism is absorbing some of the slack as mining rides its peaks and troughs.

Where you have stepped back in time and taken a historical stroll?

What: Tours are conducted by trained volunteers and run for around 2.5hrs. It may be hard to keep your guide’s passion in check, so allow at least three hours in your schedule or you are welcome to wander off when you have had enough. Tours are free however donations can be left in a box at the Visitor Information Centre. A small price to pay for such an enjoyable morning.

When: We visited pre-Covid. The Walking Tour brochure says that tours run on Tuesday, Wednesdays and Thursdays. I recommend you contact the Visitor Information Centre to check as we joined a tour on a Monday and the rest of the week had been cancelled due to the heat.

Why: To fill yourself to the absolute brim with interesting early Australian history and quirky facts.

How: You cannot book for this tour. Simply turn up and write your name on the clipboard. Make sure you wear comfortable shoes as, even though there is not a lot of walking, there is a lot of standing around. It is essential to wear a hat, sunscreen and take a bottle of water. Sunscreen and water are available from the Visitor Information Centre.

Who: These walking tours are suitable for all ages and abilities. The route sticks to the footpaths and other paved areas, so would be accessible by everyone. Really small children may get swamped in the detail and their attention span may not last the distance, but I will leave that to your discretion.

Related Posts: What else is there to see and do in Broken Hill? Check out my post about the gorgeous sculptures in the Living Desert on the edge of town.

Related Blogs: Would you like to see a little more of Broken Hill? Then have a look at this short video here.

Read About It: To read more about Broken Hill, check out the Ion L Idriess’ memoir called The Silver City. Idriess was a prolific chronicler of Outback Australia. Released in 1956 this historical memoir is based on Idriess’ experiences of growing up in Broken Hill. It is also a general history of the city. Available from Book Depository.

10 thoughts on “Walking through history in Broken Hill”