It is difficult to distill all that I saw and experienced in 23 days in Portugal down to 1 000 words, so I thought I would attempt to capture the essence of the walk in ten dot points. It’s not a definitive list and I’m sure there will be many tips that occur to me after I hit the submit button – but here we go:

1. Be thin before you arrive!: Portugal, unlike Spain, has a delicious range of cake shops or pastelaria. It is possible to eat your body weight in cakes – especially pastel de nata – every day! You will be walking every day so I think this gives you the perfect excuse to sample all the delights the cake shops and cafes have to offer. All in the name of research, of course!

2. Take good shoes/boots: I estimate that over 80% of the walk is on hard surfaces, i.e. tarred roads, edges of highways and kilometres and kilometres of mongrel cobblestones. Even the smallest, remotest village has wall-to-wall cobblestones underfoot and this becomes a special kind of torture at the end of the day when legs, feet and ankles are already tired and sore.

3. Friendly locals: you will find the Portuguese people unfailingly friendly and welcoming. A word of warning when asking directions. Be prepared for a long and loud stream of Portuguese with much finger pointing and arm waving. All to help you of course, but it can be a bit overwhelming when you only pick up every 50th word! Then the neighbours join in and give their 50c-worth of alternative routes and it becomes quite the community debate. Often I found that after this long conversation the person would insist on walking with me, grabbing my arm to lead me along, to ensure I got back on track. Very caring and nice to experience in this day and age when few people have time for strangers. (I did return the favour one day when I helped an old lady muster her sheep by using my walking poles to corral the recalcitrant sheep down the road! But that’s another story.)

4. Dogs: while the humans are super-friendly, Portuguese dogs would like to have you for breakfast. The security-conscious Portuguese all have bored, frustrated and very angry dogs of all shapes and sizes to protect their properties. While these are mostly behind locked gates and fences, it is still off-putting to be assaulted by a cacophony of barks and growls as you creep by. Then there are the packs of roaming dogs. They certainly give you pause but I quickly learned to use one walking pole as a prodder/barrier and then raise the other as if ready to strike. The dogs soon got the message and I walked on unharmed…but always with one wary eye checking behind me.

5. Plan rest days wisely: I am kicking myself that I didn’t allow more flexibility in my schedule to stay longer in a few places. I had rest days in Coimbra and Porto which were interesting and enjoyable, but I would have loved a rest day in Tomar to immerse myself in the Knights Templar history of the town. A couple of extra days in Porto could also have been easily filled with the sights and sounds and beverages of that amazing city. I would consider an extra day too in Valença/Tui on the border of Portugal/Spain. Its walled cities and cathedrals were worthwhile exploring.

6. Consider the Coastal Route: I only walked 5 days on the Coastal route and was kicking myself (again) that I didn’t allow time to walk the rest of the route from A Guardia up to Rendondela (along the Spanish coast). The sea breezes, port cities, and the lonely cry of a seagull, made for a completely different camino experience for this chick from the bush. The terrain was interesting with a smattering of Roman roads, and the route was well-marked and relatively free of crowds.

7. Calls of Nature: in contrast to Spain, public toilets do exist in Portugal and can be quite plentiful in some places. Unfortunately nine times out of ten, they are locked! Be prepared to dive into the bushes if nature calls but choose your location carefully. Beware of:

8. Weather: prepare for everything. I guess springtime can be rather unpredictable but be ready for weather of all sorts. There are few fountains, or few with potable water, so ensure you carry water with you. Sunscreen is vital. It can also get pretty windy and there were a few days I did Marilyn Monroe imitations with a billowing poncho – rather undermining its effectiveness. Needless to say there was NOTHING else remotely Monroesque about me during the entire walk!

9. Be Bilingual: it is quite a culture shock to walk across the long bridge at Valença/Tui. Within minutes you are in a different time zone speaking a different language. Instantly it became ‘Gracias’ rather than ‘Obrigada’ but the locals are forgiving. If this is not doable for you, English is pretty widely spoken and it is possible to muddle through without a word of either Portuguese or Spanish. 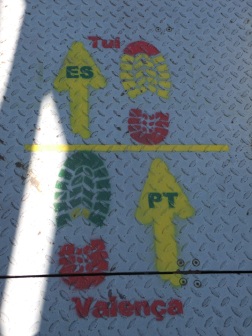 10. Prepare for Crowds: it is relatively quiet and relaxing from Lisbon to Porto but that changes noticeably from Porto onwards, and especially from Valença/Tui (the border). What are all these strangers doing on my walk?? It is yet another small culture shock, and the competition for a bed ramps up significantly, but is it wonderfully social.

Portugal is a spectacular country and I was amazed on a daily basis by its abundance and the profusion of flora and fauna. I was expecting a more Mediterranean look and feel and, while the stone houses and crumbling villages were very similar to Spain, the people and the atmosphere was a whole new identity.

I haven’t done it justice in just ten dot points but hopefully it is enough to tempt you.

Read About It: For a copy of Brierley’s Guide to walking the Camino Portuguese, purchase it from Book Depository