Not to be outdone in the USA, they have ABM (Another Bloody Monument) but in Washington DC, I bloody loved it!

A couple of years ago we made a flying trip to the USA for The Brave Man* to complete a research project and attend a huge national conference in Washington, D.C. I was chief bag carrier and got to ‘play’ tourist to my heart’s content while he had to be serious. That worked for me!

Our introduction to Washington was on check-in at our hotel, the Gaylord National Harbour. It was an eye-popping 2 000 rooms and had a full-sized village constructed in its atrium area. This should have given us some inkling of the other big things waiting for us in this city. Yes, I know I am showing my small-town roots when I marvel at these things but having worked in the 5-star hotel industry in a previous life, I have some understanding of what it takes to run a hotel efficiently and effectively, yet I am still boggled by the idea of 2000 rooms.

We tossed our bags into our hotel room and headed out to explore. While the Gaylord was an amazing hotel, it was quite a distance from the centre of the city so it gave us a good opportunity to try out the local public transport system. It was our first experience with the concept of travel cards (that you load with credit) rather than paper tickets, so no doubt, we looked like typical dopey tourists as we inserted our unloaded travel cards into the turnstiles, only to have them spat back out. Oh well, all part of the fun.

We eventually arrived at the L’Enfant Plaza metro station in central Washington and strolled the block or two onto the Mall. It felt quite surreal to stand in that large open space with the Washington Monument at one end and Capitol Hill at the other. The Mall is like the glue that holds all the key sights together. It is an elongated, green expanse edged by all manner of monuments, museums and galleries. After seeing it on TV for so long, we were finally there.

As The Brave Man* only had the afternoon free before his conference commenced, we had to focus on what he would like to see and he chose the National Museum of American History. This museum was the ideal introduction to the entire country, both politically and socially. It had the most extensive coverage of USA military history which made The Brave Man* quip that it appears that the only countries the USA has not met in battle are Australia and New Zealand! (But perhaps if Donald Trump wins the Presidential race next month, that anomaly will be rectified!)

The next day dawned bright and clear and I prepared to play tourist while the other half prepared to play conference. I was rugged up to within an inch of my life as there were still patches of snow laying around, but the brilliant blue skies made the cold more than bearable.

With the day stretching out before me, I took a slightly different approach and jumped on the DC Old Town Trolley Company bus to help me to cover more territory. This was an effortless way to get an overview of the city and its history. First, I took the Green Line out to the north-west of Washington through historic suburbs, past all the embassies and then up and around the National Cathedral before returning back through Georgetown, Foggy Bottom (I love that name!!) and the White House. I jumped straight off that bus and onto the Orange Line, which travelled around the Mall – up to Capitol Hill, Union Station and the Jefferson Memorial. Both of these tours had comprehensive audio commentary and by the end of the day, my brain was fit to burst, it was so full of facts and figures. What it also achieved was to highlight all the places I wanted to visit on foot, and in depth, the next day.

With my running shoes on and firmly laced, I set out on my final day to cover a serious amount of territory. Stay out of the way of this tourist on a mission! 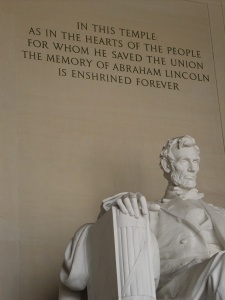 First stop was the Lincoln Memorial which was as imposing as I had imagined. They really know how to revere their presidents in that town, although I was a tad disappointed that Lincoln didn’t come to life as he does in the Night at the Museum II movie. Now that would have been memorable!

To continue the Lincoln theme, I spent a fascinating couple of hours at the Ford’s Theatre where Lincoln was fatally wounded by John Wilkes Booth. An absorbing snapshot of history, but far more American political shenanigans than this small Australian brain could ever process and retain. A tip for the unwary: get to the Theatre first thing in the day or be prepared for long queues.

The White House was high on the must-see list. Naturally, you couldn’t get close to the building, and who would want to with those crack snipers on the roof? Instead the official Visitor Centre provided useful videos and background on its construction, and many of its colourful residents. The next best thing to seeing inside the American seat of power.

The Korean War Memorial was powerful and sobering. Nineteen life size sculptures of men in army uniform make their way, in formation, through low shrubs as if on reconnaissance. At the same time, their images are mirrored in a marble wall, doubling the impact of the scene to 38 soldiers to reflect the geographic 38th parallel the War was fought on, and the 38 000 soldiers killed in the conflict.

Just around the corner, the Martin Luther King (MLK) Memorial was thought-provoking and ingenious at the same time. The massive stone statue of MLK links to one of his speeches that included ‘out of a mountain of despair, comes a stone of hope’. It is also surrounded by many of his iconic sayings – as if the sight of a nine metre tall man isn’t impactful enough, now it challenges me to have to think as well?? For once, my timing was good and I tacked myself onto a crowd standing around a National Parks ranger. You get so much more out of a visit when someone local, and passionate, shares their knowledge.

Time was running out as I jogged back up the Mall – with all the jogging locals – past the Washington Monument (closed to the public due to safety concerns after a recent earthquake), paying a quick visit to the Smithsonian Castle, and finally arriving at the National Museum of the American Indian. Thank goodness there were lots of interpretive videos and places to sit down in this facility, as that was all I was good for by that stage in the day – tired legs and overloaded brain.

As I stumbled back to the Metro, I felt a little guilty that I really hadn’t done Washington justice. This is a deeply fascinating city and you would need to commit at least a week to even scratch the surface…although, maybe short, targeted visits are just the ticket to avoid a bad dose of ABM!

What: Two and a half days in Washington DC to capture the essence of the city. Definitely not long enough!

Where: Washington DC, United States of America – mostly within a 1-2km radius of The Mall.

When: We were there in Spring – just after a few days of serious snow! Cold but beautiful.

Why: Visit Washington if you enjoy history of all kinds, politics, architecture, art, science and spacious parks and lakes. Yes, just about something for everyone.

How: We used the public transport buses and trains to get to/from our hotel. It was faultless once we worked out how the thing worked.

Who: Myself, The Brave Man* and thousands of patriotic Americans and international tourists.

*The Brave Man refers to my husband. He is indeed a brave man for marrying a crazy woman like me!