When I am on the road somewhere, it is easy to sit in the car and just drive. The concept of the ‘journey’ goes out the car window and the focus is on the destination at any cost.

For years I have been driving North from my home town, zipping through some scrubby, unattractive bush and straight past the turn off for the site of Hands on Rock. As the name indicates, there are hands and rock, but it is so much more than that. It is a stunning introduction to some classic Aboriginal art and culture right in my own backyard.

This part of Central West New South Wales is Wiradjuri country. Once it was one of the largest Aboriginal nations in New South Wales and covered over a third of the State.

“Hands on Rock is located on the far eastern boundary of the Wiradjuri nation and is part of an extensive trading network from the North and South and between inland and coastal groups. It is an integral part of a ceremonial area and is of particular importance to the Wiradjuri people.

The Wiradjuri were semi-nomadic and moved camps in accordance with ancient Dreaming tracks, songlines, and seasonal food supplies. Throughout the year different groups gathered in the area to talk, exchange goods (resources such as stone and ochre, songs, ceremonies and dances) and to hold corrobborees. These great religious ceremonies brought hundreds of people together from distances of hundreds of kilometres. Source: Onsite signage 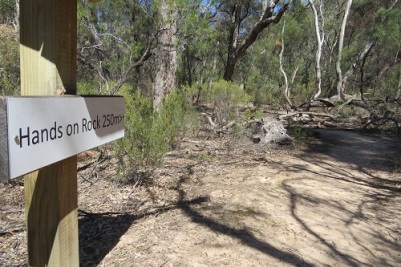 It was a crystal clear Spring day when I finally gave in to the call of the journey, flicked my car indicator on and turned off the main road onto the dusty, ochre-coloured track. If you are thinking of visiting Hands on Rock, leave your low-slung European sports car at home! The road is fairly bumpy and washed out from way back in ancient times when it used to rain (:-)), however it is navigable by most vehicles including 4WDs with caravans in tow.

After about 500m, the road levels out into a wide clearing with a good turning area for large vehicles. A couple of grey nomads were packing up their morning tea just as I arrived, ready to explore more of Australia and create havoc on the road at the same time! Just joking! I am simply jealous that they having the time and bank balances to allow them to travel aimlessly and enjoyably.

The gentle breeze took the edge off the climbing morning heat. It lifted the eucalypt branches and they clacked and crackled together as a not-so-subtle reminder of the drought. The Aussie bush is beautiful, although it is not a lush beauty. It is more sculptural and sparse, more spacious and solitary.

As I stepped out on the sandy path my senses were overwhelmed. The scent of eucalyptus is so uniquely Australian. It starts out subtle, but as the day warms it must also warm the leaves and they gently release their oils. I’ll never forget returning to Australia after a year living in England and as soon as I walked out the automatic doors of Sydney airport, I was completely enveloped in the astringent eucalypt perfume. Even in a city of 5.7million people, the Aussie bush lets you know it is not too far away.

The path wobbles its way through the bush, past Xanthorrhoea trees, over rocks and past rocky outcrops with their sheltered sides covered in crinkled lichen. How resilient must those mosses and lichens be to withstand the ravages of drought and, at times, bushfire?

The path is relatively level until after about 500m it starts to climb up towards a large sandstone outcrop and overhang. The layers and layers of oranges, brown and cream colours are artworks in themselves, as if some gentle hand has made large brushstrokes across the rock face.

After hugging the rock wall, the path bends around a corner and turns into a wooden boardwalk providing the best perspective to stand back and admire Hands on Rock. I felt a bit guilty standing there as, until that day, I had never taken the time to acknowledge that I had such rich Aboriginal history and culture, right on my doorstep.

The paintings cover a stretch of about 15 metres long. Hands of all shapes and sizes decorate the wall and low hanging ‘ceiling’. Yes, most of the hands are quite faded and many are simply vague outlines, but so would you be if you had been exposed to the elements for thousands of years. Actually, we do not have a clear idea of how old the artworks are. Even the interpretative signage onsite doesn’t suggest an age.

The rock art display “consists of over 100 hand stencils of women and children, emu feet and other motifs. Hands of Rock is an example of the stencil style of painting where by the image is created by blowing wet paint from the mouth over and around an object held against the rock face. The pigments were made from naturally occurring substances such as ochre. The pigments were usually ground and mixed with a base (water, blood, fats or sap) to make a paste. Source: Onsite Signage

With such rudimentary, but clever, painting techniques it is even more amazing that the images have survived the harsh climatic conditions.

I was lucky to have the whole place to myself so I could study the scene at my leisure. When I see things like this, I can’t help but wonder about the people behind the hands, their life and their dreams. No doubt dramatically harder than what we experience today, but perhaps more fulfilling (if that was even a thing back then) being so closely connected to the land and with a far stronger spiritual base. I am not romanticising their existence, just wondering.

A few tips for your visit:

This was one of those occasions when I was pleased I interrupted the journey and ignored the call of the destination. Surely neither of these concepts, journey or destination, were even remote considerations for the Wiradjuri people of the past.

When was the last time you enjoyed the journey?

What: Hands on Rock has over 100 examples of Aboriginal art. There is detailed signage and information at various stages of the walk explaining the history of the people and place as well as flora and fauna.

Where: Hands on Rock is approximately 55km north of Mudgee, NSW on the Ulan/Cassilis Road.

When: You could visit at any time of year however I would recommend avoiding the serious heat of Summer due to the lack of water, shade and the real risk of bushfire. An early morning or late afternoon visit would increase your chance of seeing native wildlife.

Why: To pause and take a moment to appreciate the amazing culture and Aboriginal heritage that surrounds us.

How: You will need a car to drive to Hands on Rock as there is no public transport. The road out to the area is sealed and in good condition.

Who: The track is suitable for walkers of all ages and levels of fitness. The fitter you are, the easier it will be. The uneven terrain and scramble over large rocks and steps to access the paintings would make it very challenging for those not too steady on their feet.

Related Posts: For information about other bushwalks nearby, have a look at my post about walking the Castle Rocks Walking Track.

Related Blogs: To learn more about Aboriginal rock art, have a look at the top seven sites as identified by Australian Geographic.

Read About It: For more information about the concept of Aboriginal songlines, grab a copy of Bruce Chatwin’s, Songlines. Bruce travels deep into outback Australia to unravel the mystery of songlines and their importance to Aboriginal people and culture. Available from Book Depository. 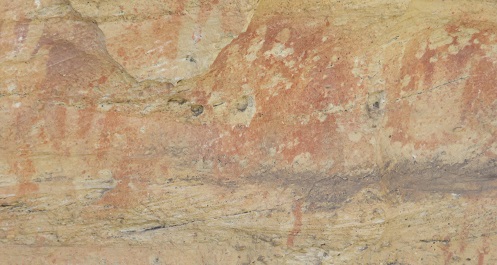