When I am traveling overseas and I tell people that I live in rural New South Wales, they immediately assume that I come from Outback Australia.

Not by a long shot!

Seat belt on, sunglasses on.

Point the car West and drive…

Leaving my home town, the landscape became progressively flatter and flatter like some great iron had been pressed onto the Earth removing any crinkle or bump. The soil changed too from a dry brown to rich red and orange tones.

Everything transformed before our eyes as the entire scenery reflected the availability (or not) of water. The trees grew sparse, spindly and lower to the ground. Their leaves shrivelled and tinted silvery grey/green to ensure they retained as much moisture as possible. It was easy to spot the course of a river or creek as the trees immediately increased in height and density. What a joy and relief it would have been for early explorers to come across water for themselves and their horses.

Even though the landscape was almost uniformly dead flat, there was still plenty to look at. Bird life was plentiful with a lone soaring Wedgetail Eagle, flocks of raucous pink Major Mitchell cockatoos and opportunistic crows feeding on road kill.

We had arrived in BIG sky country. The crystal clear sky stretched from one point of the compass to the other. It’s not like living or driving amongst rolling hills where hills seem to step up to greet the horizon. Out here it is a complete 180° view of the wild blue yonder.

A sprinkling of remote towns and villages break the journey as the road stretches ever West. The Big Bogan at Nyngan caused all sorts of controversy when he was built. In Australia to call someone a bogan is considered an insult, similar to a loser, an uncouth, rude and/or hopeless individual. Nyngan sits on the Bogan River so, in their defence, they are only capitalising on their natural assets. His launch into the World generated an incredible amount of media attention for the town. No such thing as a bad publicity, I guess.

The further West we drove, the friendlier the traffic became. The Aussie ‘finger flick’ of greeting became standard and it felt rude not to respond. For those of you who plan to drive in the Outback, it is a very easy manoeuvre to learn and perform. Follow these simple steps:

Easy! You will be a local before you know it!

An old man goanna scooted across the road and up the nearest tree and goats, emus and kangaroos made up the wildlife roll call. The drought had taken its toll on the paddocks and they were bare of sheep and cattle. How these farmers and graziers are making a living without any ground water or rainfall is beyond me.

Stepping out of the car, the cooling tick of the car engine was the only sound. There’s no traffic noise, only a slight breeze rippled my shirt and hummed through the fence wire.

The dust haze on the horizon swallowed the end of the dead straight road. A glint on a windscreen far off in the distance was the only sign of life and that could have been 20km away. It seemed like the tar road disappeared into the Never Never, completely melted by the shimmering heat mirage.

Willy willies picked up clouds of red topsoil, carried them across paddocks and flung it across the highway.

It is a harsh environment, but there is a stark beauty in its harshness.

The further West we drove, the more I understood why this part of Australia is a movie-maker’s idea of Paradise. Indeed there are many stretches of countryside between Menindee and Broken Hill which became the setting of various Mad Max films.

Miles and miles of nothingness.

We had driven so far, we had changed time zones and yet not left the State.

It is a special part of Australia and it would take a special person to live out there. I grew up on a farm, but civilisation was only 30km away. Out there in western New South Wales, it could be 30km to your front gate and mail box, and 200km to buy a loaf of bread.

The constant battle for water, battling the elements and the fact that nothing is easy driven by its very remoteness, I just don’t think I could do it. The trade-off, of course would be the absolute quiet, the constant interaction with nature and the sense of running your own show without interference. This part of the World attracts unique and determined individuals and I imagine you would have to grow up there to truly understand. 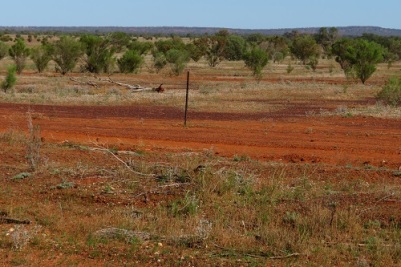 The temperature seemed to climb with every kilometre we drove and by the time it hit 43°C, we knew it was time to turn the car around. 1 957km later we arrived home, back where I fit, back where I belong. Back in the regional, not the remote.

Outback Australia – an outstanding place to visit. A different story entirely to make a life there.

21 thoughts on “Hitting the Road to the Australian Outback”