When you think of Outback Australia, you may think of wide open spaces, searing heat, endless miles of nothingness and dust. Lots of dust.

What may not immediately spring to mind is big hair, sparkly sequins and endless rainbows of feather boas.

That’s until you step through the front door of The Palace Hotel in Broken Hill.

The Palace Hotel is an amazing combination of old and new. It sits in a very prominent position on Broken Hill’s main street and plays a very important part in its history.

The Palace Hotel started out as the home of the Temperance Movement in Broken Hill in the form of a Coffee Palace. Erected in 1889 at a cost of £12 190, or nearly $3million in today’s money, the aim was to provide a sober alternative to all the gambling dens, gin palaces and overflowing pubs that were flourishing in the town at time.

Not surprisingly, the business was not a financial success and it became a licensed hotel a short three years later.

For many years The Palace Hotel wasn’t really on anyone’s radar until it was featured in the 1994 film, The Adventures of Priscilla Queen of the Desert. Mitzi Del Bra, Bernadette Bassenger and Felicia Jollygoodfellow took a room at the Hotel and then sashayed down Broken Hill’s main street in all their finery. The stunned looks on the local’s faces were priceless.

Today, the Hotel is an amazing blend of the old, new and kitsch. Many of the original architectural features have been retained including the gorgeous timber staircase that winds its way past the Priscilla Suite and up to the top floor. The interior is peppered with art deco (or is it nouveau?) signs and then there are the murals!

Murals seem to cover every square inch of the public areas of the Hotel. While perhaps not high art, they are a wonderful nod to outback Australia, the surrounding landscape, dreams of lush pastures and Botticelli. It is almost hard to know where to look first and it is very hard to take it all in as there is such a riot of colour.

Most of the murals were completed by an indigenous artist, Gordon Waye, and are still fresh and vibrant today. I was a bit naughty and snuck up to the first floor, ignoring the sign saying “House Guests Only”. I just could not resist the desire to see the murals from every angle.

Back on the ground floor it was time to refresh with a cold beer. The Hotel comprises a Front Bar, two floors of accommodation, a restaurant, a performance space and a reception area that is full to the brim with brilliantly-coloured feathered boas, an eclectic mix of taxidermy animals, and glitter. Lots and lots of glitter.

Earlier in the day I was beside myself with excitement as we had coincided our visit to Broken Hill with the Palace Hotel’s monthly Drag Bingo evening! I had heard it was a hilarious event and was so excited until I contacted the Hotel only to be told it was cancelled that night due to a private performance for the Indian Pacific tourist train. Damn! Bad timing on our part.

The Front Bar is a wonderful corner of Australiana, popular with both tourists and locals alike. They have retained many of the old timber touches and trimmings and it is chockful of atmosphere. We toasted each other and kicked back to enjoy our surrounds and then, out of the corner of my eye, I saw a dazzling flash of the brightest red hair.

I snuck over to peek past a screen that was partially blocking a doorway and sure enough, there was Shelita Buffet (pronounced She’ll-eat-a Buffet) and her bestie, relaxing after their performance. They were very good to pop their death-defying stilettos back on and pose for a photo or two. Our small brush with fame.

If you don’t mind a bit of karaoke the Hotel also holds a monthly Drag Karaoke night. I think I am more of a bingo girl and the World is not ready for my singing voice!

The Palace Hotel is now the home of the annual Broken Heel (Get it? Broken Hill? Broken heel) Festival. Four days of desert and disco and all things bling and bright. Apparently it is an amazing event and is growing in leaps and bounds every year. Perhaps something to add to your must-do list? If you are keen, I would book your seat on the Stiletto Train from Sydney to Broken Hill as soon as you can. It completely booked out last year.

I love the sense of acceptance and openness that comes with a festival like this. Rural and remote Australia may have unfairly developed a reputation for being ultra-conservative. The Palace Hotel and the Broken Heel Festival both high kick that stigma clean out of the desert.

If you are heading to Broken Hill and feel like a dose of happiness and history, don’t miss The Palace Hotel.

And get your inner rainbow on!

Where did you last spot a rainbow?

When: A visit to The Palace Hotel is a good idea any time of the year, although you may want to skip the middle of Summer in Broken Hill. We visited in mid-November and enjoyed days up to 43°C. The next Broken Heel Festival will be held from 10-14 September 2020.

Why: To enjoy fascinating history, a refreshing beverage and a little bit of bling.

How: Broken Hill is a popular road trip destination and good roads link you East to Sydney or South-west to Adelaide. Fly to Broken Hill via Rex Airlines, catch the train from Sydney or the train/coach combo from Dubbo.

Who: We were warned that some of the commentary during Drag Bingo and Drag Karaoke may be a little colourful to say the least. Leave the kiddies and conservative adults at home.

Related Posts: What else is there to see and do in Broken Hill? Why not wander the streets of the town to soak up some more history or pop into one of 27 art galleries? Check it out here.

Watch It: Feel like a relaxing evening at home and a bit of easy viewing? Check out Priscilla Queen of Desert and suspend belief for a while. Available for a whole variety of online sources including YouTube.

Read About It: If you love the movie, get a copy of the piano and vocal selections for Priscilla Queen of the Desert so you can sing along. Available from Book Depository. 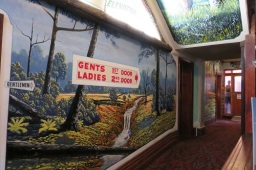 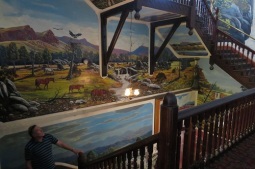 Up the colourful stairs

6 thoughts on “Get Your Rainbow On in Outback Australia”