It’s amazing what you can find in the desert.

Many, many years ago I received a Christmas card in the mail (Yes, how antiquated) featuring a striking sandstone sculpture set in a dramatic landscape with a golden sun sinking into the horizon in the background. Yes, it was probably the most unusual Christmas card design on the planet and it has stuck in my mind ever since. When we planned our western road trip to Outback New South Wales (NSW), on the top of my list of places to visit was the Sculptures and the Living Desert.

Located approximately nine kilometres North of Broken Hill, the Sculptures and Living Desert site was established by the local Council to protect and promote the native plants and animals of the region. The 2 400ha reserve started out as a simple patch of arid landscape and was then enhanced to include the:

Broken Hill has long been a magnet for artists of all kind, with an extra special attraction to painters who cannot resist its ochre and red soils and stark landscapes. In 1993 the Council organised a sculpture symposium and 53 tonnes of sandstone blocks were trucked from Wilcannia, 200km away.

Sculptors from around the World, including Mexico, Georgia, Syria, and of course, Australia were invited to transform the simple sandstone blocks into works of art representing their stories and mythologies. The end product was 12 sculptures varying in size and complexity, truly enhancing a lonely hilltop in Outback NSW. 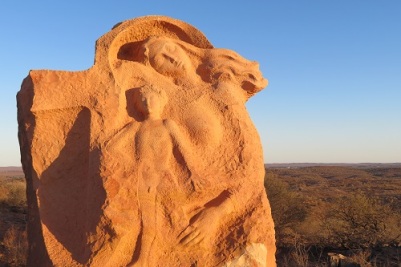 I had been told that sunset was the best time to view the sculptures and as the heat started to wane, we made our way out of Broken Hill. The local Tourist Office displays the sunset time in their window and we had noted that (in late November) sunset was due at 740pm. Even at that time of the evening it was still 30°C. Don’t travel far without a water bottle in outback Australia.

As we drove North, the evening light was gentle on the landscape softening the view into a palette of rich golds and browns. Being a weeknight, there was very little traffic and it felt like we were the only car within hundreds of kilometres. The turn-off was well sign-posted and as the road twisted and turned it was almost as if, with every kilometre, we were working our way deeper into the landscape. Finally the road started to climb up a steep hill, to open into a clear parking area. We had arrived.

Only a few cars were in the parking area which made me think that we would have the place pretty much to ourselves. Some very clever people had brought their wine and picnic chairs and were well positioned to make the most of the sunset. A good plan if you are considering a visit.

My immediate sense was that this was a very peaceful and calming space. The sculptures were warm to touch and radiated the heat of the day. It was blissfully quiet and the only real movement was from the soft breeze nudging the low shrubs and hard grasses. Unfortunately the breeze did nothing to discourage the thousands of incredibly persistent flies. It wouldn’t be Australia without the flies! 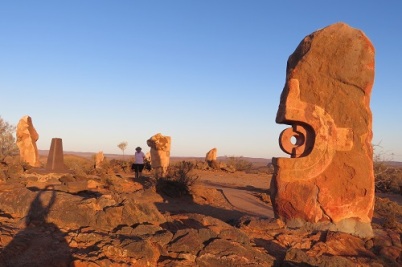 The 12 sculptures were dramatically different in their design and structure and I do admit to being a little disappointed. I was expecting them to be more striking and dominant, to stand proud of the desert landscape, but many of them were almost overwhelmed by the environment. Perhaps the designs and patterns had simply weathered away under the harsh conditions of this region.

Eventually the sun began to dip towards the horizon and the last few photos were taken. Three people sprinted to the top of the hill just as the sun disappeared. “Missed it by that much”, as Maxwell Smart would say. 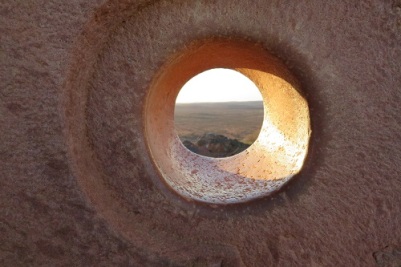 It was a special way to spend an evening. Sitting and contemplating the rough and rolling Barrier Ranges and watching the evening light transform the sculptures from hard, inanimate objects to soft, glowing statues that seemed to have grown out of the hill itself.

Ribbons of dust hung over the valley floor as vehicles made their way home at the end of a long working day. It was the perfect way to end the day, serenity amongst the sculptures, out in the sand, out in the desert. 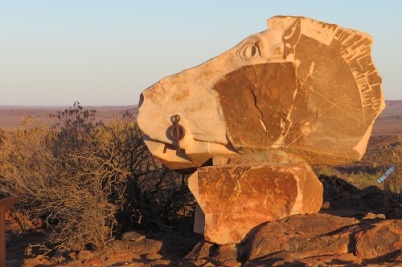 Have you found sculptures in strange places?

What: Entrance to the Living Desert, including the sculptures is $6.00 per person.

Where: The Sculptures are located on the northern outskirts of Broken Hill. Broken Hill is located around 1 150km west of Sydney and 520km from Adelaide.

Why: To enjoy the flora, fauna and fine arts in a stunning landscape.

How: You will need a car to travel out to the sculptures as there is no public transport. You could walk there (around 17.5km return) or cycle, however be careful of traffic if you are traveling in the late afternoon or evening. There is no designated walking/cycle path. 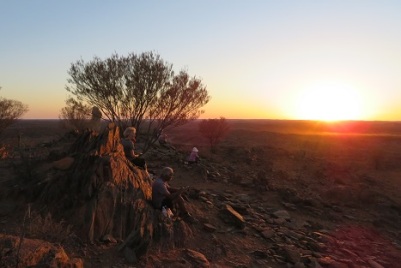 Who: The Sculptures are accessed by a smooth concrete path. The path does have a few undulations and steep parts, so while accessible by wheelchairs and strollers, some care is required.

Related Posts: What else is there to see and do in Broken Hill? Especially when too much art is never enough? Check out my post about the range of spectacular art galleries located in and around the town.

Related Blogs: To read a little more about the Broken Hill region, check out one of the 84 blog posts or 1001 photos about Broken Hill here.

Read About It: To a slightly older view of Broken Hill, grab a copy of the Ion L Idriess’ memoir called The Silver City. Idriess was a prolific chronicler of Outback Australia. Released in 1956 this historical memoir is based on Idriess’ experiences of growing up in Broken Hill. It is also a general history of the city. Available from Book Depository.

29 thoughts on “Sunset, Sand and Sculpture”