How good does it feel to finally tick something off your Bucket List?

Finally, I decided I had to commit and, since this annual event was around the time of my father’s birthday, I rang my parents to check whether they would care to join me. It appears that they also had the same conversations every year they saw the event on television. So, it was agreed that a weekend in Canowindra amongst the balloons would be the perfect way to celebrate Dad’s 80th birthday in 2014.

Canowindra is a historic little town about 60 km west of Orange in Central West NSW. It is one of those places that has transformed itself from a sleepy agricultural service centre into a food and wine destination. Unlike many larger places though, it has retained its small town, heritage feel which equates to a low-stress and relaxing weekend.

Friday night in Canowindra and the town was jumping. I had booked our accommodation 12 months in advance, and confirmed it multiple times, and it was just as well.

Canowindra was overrun with balloonists, support crews, balloon lovers and thousands of other tourists just like ourselves. The footpaths were bustling and the cafes and pubs overflowing onto the streets. I can only imagine what a positive impact this event must have on the local economy, creating a sense of excitement and energy, if for only one weekend.

We also booked a table at one of the clubs for dinner and, even with a booking, it was a 60-minute wait for some very average food. But it was hot and filling and just what we needed after a big day of travel and sight-seeing.The two main features of the Balloon Challenge, from a visitor’s perspective, are the Balloon Glow on the Saturday night and the Key Grab on the Sunday morning. That leaves plenty of time for a lazy exploration of the Canowindra streets, the many boutiques, art and craft stores and gourmet food and wine outlets, and the Age of Fishes Museum. Of more interest to the men in our party were the many old Holden cars parked cheek-by-jowl (or bumper to bumper?) behind the dusty glass windows in an old service station on the main street. This collection was unique in Australia apparently due mainly to the pristine condition of many of the models. It was a shame that its opening hours were sporadic and unreliable. The men had to make do with pressing their noses up against the glass and looking longingly. (NB: sadly the collection has now been sold and dispersed).

As the day waned we gathered up our folding chairs, picnic baskets and every skerrick of warm clothing we possessed and, along with a thousand of our closest friends, converged on the local sports ground. This was the home of the Balloon Glow and a party atmosphere was definitely in the making with every known food stall and beverage bar onsite. We really didn’t need our picnic basket at all as we feasted on delicious pulled pork rolls and traditional Country Women’s Association delicacies.

With our fold-up chairs as close to the ‘front row’ as was polite, we were transfixed by a handful of balloonists as they manoeuvred their bubbles over the tallest eucalypt trees to land lightly and precisely on the grass. Now that is skill! Other balloons were trailered onto the field in a collapsed state and placed strategically around the ground.

Excitement built as the sun went down and the number of balloons increased. When it was fully dark, the lights went out, the music began, and the balloons worked their magic. Describing the sight as ‘spectacular’, does not do it justice. The balloons, and the flames inside, winked on and off in time with the music, blinking out vibrant colours and magically appearing out of the darkness. Such a simple activity but so striking and memorable. Sadly the music ended, the lights came on, and the crowds beat a hasty retreat in much need of a hot drink and a warm bed.

The next morning dawned bright and clear, as is the autumnal habit of this region, and we crunched across the frosty paddocks to watch the Key Grab. The idea is that balloons must accurately navigate their path to a central target and attempt to grab a key off the top of a tall pole and/or throw their marker into a small circle. The rewards for such precision are some handy cash prizes.

We could have looked a bit silly – a large crowd of people standing in the middle of an empty paddock at 630a.m. on an icy morning. But as we spotted the balloons pop up on the horizon and make a bee-line towards us, we knew it had been worthwhile. They started out looking like boring black dots but as they zoomed closer, the early sun lit them up like floating rainbows – a riot of colour and vibrancy. 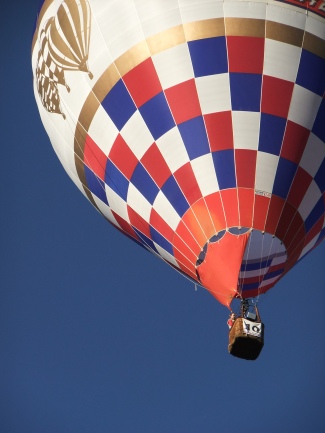 The crowd cheered and ducked for cover as the balloons zeroed in on us and the target, but just as they neared, a gust of wind or a subtle breeze would foil their attempt and send them gently veering off into a neighbouring paddock. Some balloonists managed to throw their weighted markers but the ‘golden’ key remained firmly ensconced on the top of its pole. There is always next year.

As we made our way home, we wondered why it had taken us so long to visit Canowindra and the Balloon Challenge. There is so much we didn’t get to see and do there, including a ride in an actual balloon; hopefully it won’t take the same length of time to tick it off the Bucket List all over again.

What have you ticked off your Bucket List lately? 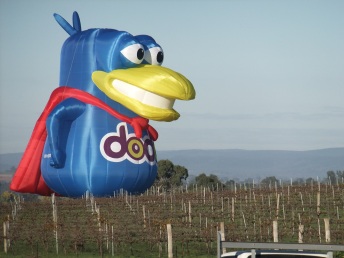 What: We stayed at the Old Vic Inn in a massive room with 15 foot ceilings. Room rates were $119 per room per night and included a light continental breakfast. The building itself is old and a wee bit tired but the location and atmosphere can’t be beaten. There was a small entrance fee to the Balloon Glow but the Key Drop activity was free.

When: Canowindra International Balloon Challenge will be held on 18-25 April 2017.

Why: Do this if you are in need of a fun and interesting weekend away in gorgeous countryside or if you have a weakness for hot air balloons. Book your accommodation early.

How: We drove from Mudgee via Dubbo. Yes, the scenic route!

Who: A family affair, including a birthday boy.

Related Posts: Watch this space. I have my very own balloon ride scheduled for 4 March 2017. Excited!!

Related Blogs: For a unique perspective on the balloon festival, have a read of balloon pilot’s blog: https://nomoreusedto.wordpress.com/2012/04/22/canowindra-balloon-challenge-2012/

1 thought on ““Would you like to ride in my beautiful balloon?””