How easy is it to be dazzled by the romance of an exotic destination, and your own backyard gets ignored? I know I am guilty of this sometimes, until I make myself stop and acknowledge the beauty right under my nose. 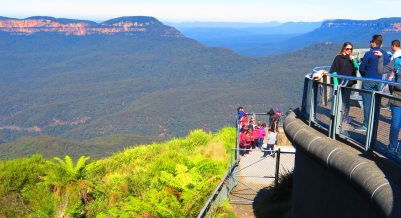 Recently I had the opportunity to stay in Katoomba for a couple of days. Katoomba, in the NSW Blue Mountains, is an easy two hour train ride west of Sydney, and an easy two hour drive from my home town.

Often, if heading to Sydney for the day, I drive to Katoomba, park my car and train it into Sydney to avoid the traffic chaos. This trip, rather than driving straight home, I booked myself into a little motel just up the road from Echo Point and the statuesque Three Sisters. The plan was to lock myself in the motel room and work, work, work, but it would have been inexcusable not to sample some of the surrounding beauty.

The Three Sisters is a famous Australian landmark, and a popular day-trip destination out of Sydney. As I strolled down to the lookout at Echo Point, it was like an open air session of the United Nations with every known language drifting across the walkways, matched by a smattering of exotic dress. True to name, the view across the wide valley was lost in a dusty blue haze. Apparently, the blue haze is caused by the millions of oil droplets released into the atmosphere by the large numbers of eucalypt trees.

The Three Sisters is a remarkable natural rock formation of three separate pillars, towering over the valley. For the local Aboriginal people, the Gundungurra, this landscape holds special significance. One version of the legend explains that there were three beautiful sisters named Meehni, Wimlah and Gunnedoo who lived with the Gundungurra people in the Jamieson Valley. The maidens were in love with three brothers from the neighbouring nation of the Dharruk people, but marriage was forbidden by tribal law. The brothers were warriors and decided to take the maidens by force. Tribal war forced the Kuradjuri (clever man) of the Gundungurra people to turn the sisters into stone. He intended to restore them after the danger had passed and the war had ended. Unfortunately, the Kuradjuri was killed in the battle and to this day, no one has been able to break the spell and turn the Three Sisters back to their natural form. (With thanks to the Gundungurra Nation and the Gundungurra Tribal Council).

This scenic region has always been a popular. In the early 1900s, as public transport became more reliable and comfortable, Katoomba and the surrounding villages of Leura and Medlow Bath, became the must-see and be-seen-in destinations for ‘taking the mountain air’. I can only imagine how wonderful the streets would have looked under gas light and accompanied by the rattle and jingle of horse-drawn trolley cars.

Echo Point provides the perfect starting point for an exploration of the town as well as the numerous bushwalks for the energetic.

From Echo Point there are panoramic views of the valley and the smoky blue hills that provide the backdrop for the Three Sisters. Even at 700am, it was a busy place for both amateur and professional photographers attempting to capture the perfect vista. Sometimes I wonder about the need to capture every memory via an Iphone screen, rather than being present and drinking it all in, but that is beside the point.

Although my conscience was telling me that there was work to be done, I convinced myself that the brain would benefit from a brisk walk down to the Three Sisters themselves, rather than just standing at the lookout saying ‘ooh, that’s nice’ and returning to the computer.

It is a short 20-minute stroll to the base of the first ‘sister’, along smooth concrete footpaths and through some lovely native bush. As I walked I could hear the Bellbirds’ (Manorina melanophrys) melodic call ringing out across the valley. Add to that the strong scent of eucalyptus, and you could not get a more iconic Australian experience.

The footpath is suitable for all abilities although naturally, it is pretty steep in places before meeting a couple of flights of very narrow and rough steps. The steps are worn from the many millions of feet that have come before me, no doubt some in long dresses with bustles and pantaloons. Not in 2017 though, as I strode along in my fluorescent sneakers and ‘leisure wear’.

To enhance the visitor’s experience even more, the National Parks and Wildlife Service have installed a handful of stainless steel sculptures of local fauna. Not as good as spotting the real thing amongst the leaf litter, like the vivid Crimson Rosella (Platycercus elegans) I saw, but perhaps the sculptures would be the only Australian animals the day-trippers will see.

It was glorious to step out under the dappled shadows, doing my best not to photo bomb other visitors Iphones. It felt a bit like ‘wagging’ school to be able to access such beauty in a work break. Surely I would return to the desk refreshed and inspired after all this nature?

The air was cool and crisp, and the views were the hazy blue that the region is known for. I was sorely tempted to keep on walking. Perhaps the Giant Stairway would be a good walk, or across the valley floor to the Scenic World attraction?

But no, it was time to head back to the desk.

By the time I had climbed back up to Echo Point, the place was crowded with people and tourist buses. How good would it be if we could encourage all those visitors to head west for another hour, down the Western side of the Blue Mountains and out into the ‘real’ Australia? What an economic boon it would be to rural NSW, but it is not to be. They have short itineraries, and perhaps we have not yet developed packages that are strong enough to entice visitors that little bit further.

In the meantime, I had to be content with my short visit. I picked up a bundle of brochures detailing all the day walks around Katoomba and those connecting with neighbouring towns. Those hikes would have to wait for another visit with good company and no work deadlines.

What have you discovered in your own backyard lately?

What: The Three Sisters are a highlight of the Blue Mountains National Park. Entrance is free. Detailed maps, including walking routes, are available for sale from the Information Centre. The Echo Point Motor Inn, is easy 5-minute walk from the Echo Point lookout.

Where: Echo Point and the Three Sisters are located at the end of Echo Point Road, Katoomba.

When: Both sites are open 24hours per day, although I would not recommend walking down to the Three Sisters in the dark in case of trips or falls.

Why: Escape the city, breathe clean mountain air, and smell and feel the real Australian bush.

How: Trains run frequently to/from Sydney to Katoomba. A Hop On/Hop Off bus travels all through the mountains or catch the public transport bus 686 from Katoomba Train station.

Who: Myself, a few other Aussies and hundreds of international visitors.

Related Posts: For some more fresh air and walks through the Australian bush, have a look at my post about easy day walks throughout the Mudgee region.

Related Blogs: For a fresh take on bushwalking, especially for women, have a look at https://lotsafreshair.com/?s=blue+mountains

Read About It: For a good range of maps and books about hiking in the Blue Mountains, check out Book Depository 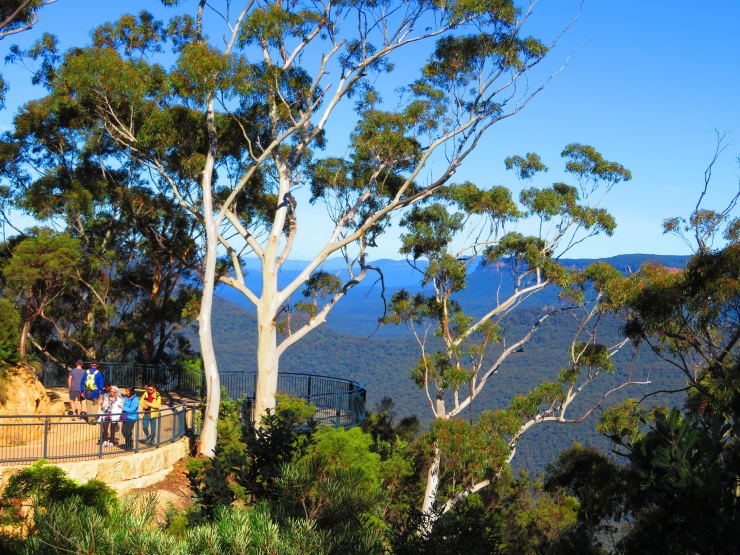