Growing up and going to school in Australia, the version of history we were fed was very English and very white. And that is just what we were expecting when we strolled into the Endeavour Exhibition – more of the same.

How wrong could we be?

It was about time that we received a more rounded version of our history and it was no less fascinating.

I am the first to admit that my school days are long, long behind me and I imagine the education curriculum would have changed dramatically since those ancient times. Hopefully by now, the history content is more balanced and well-rounded rather than the old predominance of English explorers, colonisation and the Nation ‘riding on the sheep’s back’. Thankfully there are exhibitions like this one to educate prehistoric adults like myself and help us reframe history. 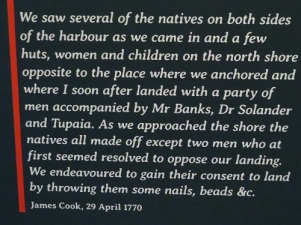 The Endeavour Exhibition at the National Museum of Australia in Canberra commemorates Captain Cook’s trip up the East coast of Australia in 1770 – a short 250 years ago. That is the version of history we thought we were going to see, but as we stepped into the darkened room it dawned on us that this exhibition was that, and so much more.

From the very start of the exhibition Cook’s discovery of Australia is paralleled with the existence, history and stories of the Aboriginal people who have called Australia home for over 65 000 years. How could you fit all that history in one exhibition?

In the darkness, a sound and light show revealed three magical waterspouts hovering in the centre of the floor. Apparently on the day that Cook and his crew spotted the Australian coastline, three waterspouts were seen rising out of the sea. To the local Aboriginal people, those waterspouts represented the spirits of their Ancestors, specifically two elderly women and one small girl. A waterspout was viewed as a bad omen and three waterspouts meant really bad trouble. Little did they know how bad it could get.

The exhibition is full of interactive displays, artworks and video installations where you have the chance to sit a while and absorb what you are seeing. What I was seeing clashed and rattled around in my brain. Not that I wasn’t enjoying all this new information and learning, it simply wasn’t what I expected.

The pomp and ceremony of old English art contrasted neatly with the handmade spears that Cook took back to England, with the spears eventually ending up at Cambridge University. Now the spears are returned to their homeland.

I particularly liked the map that chartered Cook’s path up the coast, highlighting their role as fearless explorers of this virgin land, and juxtaposed with the dreaming, stories and languages of the Aboriginal people who were resident along various parts of the exact same coastline.

When I booked our exhibition tickets, I was expecting a maritime exhibition when in reality it was a cultural exhibition. Maybe this contrast resonated with me even more because my grounding in early Australian history was so long ago.

The Endeavour Exhibition raised many questions in my mind about how we record history and what we trust, and believe to be the truth. In some ways, the Western World is privileged to have so much of our history written down. We are lucky to have copious records of what happened hundreds of years ago, although that represents only one perspective, one view of the World.

It makes me wonder about the value of the oral history of our Aboriginal people who recorded their history in stories, songs and dreaming. Is its validity diminished because it was never written down? Perhaps in the past that was the case, but now all aspects of Aboriginal culture are celebrated in exhibitions such as this one.

The Exhibition also raised many questions about how one version of history can dominate another. It doesn’t make any history wrong, it just needs to be balanced and we need to allow the space for all stories to be told.

As the exhibition unfolded, it moved into more modern times featuring artworks from Indigenous arts centres in far North Queensland.

According to the information labels, these artworks reflected the story of Cook’s voyage up the East Coast. With my limited artistic ability, I couldn’t see the connection, but they were attractive all the same.

We walked out into the sunlight again, blinking our eyes at the brightness and shaking our heads with all the new historical input. We were so pleased that we had taken the time to include this exhibition in our Canberra itinerary – there just needed to be some heavy thinking/processing to be done to put everything we had seen and learned in its rightful place.

When has history made you think?

What: There is a lot more to see at the National Museum of Australia than just this exhibition, however most of the other displays were closed due to Covid19. For the nature-lovers out there, the Museum is surrounded by a mini-botanic gardens and some stunning sculpture. Entry is free.

Where: Lawson Crescent, Acton (a suburb of Canberra).

When: The Endeavour Exhibition is open on and ongoing basis. Book your ticket here for your one-hour visit.

Why: For a fresh take on Australian history.

How: We stayed at the Quest City Walk right in the heart of Canberra. The location was perfect with easy walking distance to lots of restaurants and shops. We booked via AirBnB. (As an AirBnB Associate, I earn a small commission when you book through this link and it doesn’t cost you anything extra.)

Who: This exhibition may not be suitable for people who tend to be a bit claustrophobic. There is space inside the exhibition, but it is dark, fully enclosed with no windows or natural light

Related Posts: For some more wonderful Aboriginal dreaming, read about the story of the Three Sisters rock formation at Katoomba in the Blue Mountains.

Related Blogs: The National Museum of Australia has its own blog. For some fascinating stories about a whole variety of topics and issues, check out what they have to say.

Read About It: For an interesting read about the interactions between early white colonisers and the resident Aboriginal people, grab a copy of Kate Grenville’s novel The Secret River. An easy read and a good way to dip your toe into early Australian history. Go straight to Book Depository. 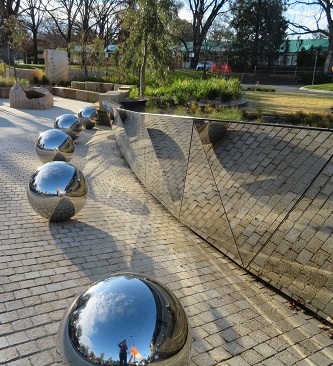 14 thoughts on “A Completely Different Take on Early Australia – the Endeavour Exhibition, Canberra”