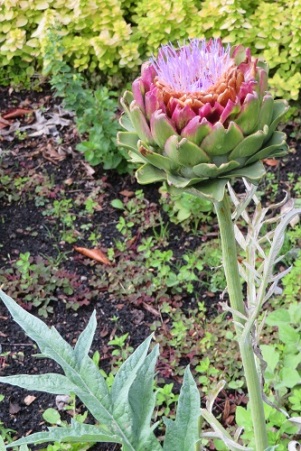 Friday night free-to-air television viewing in Australia features the usual reality TV shows, football or cricket matches (depending on the season) and endless repeats of American sitcoms and B-grade movies. The only bright spot for the horticulturally-inclined is Gardening Australia on ABC TV.

I do admit to finding these and other home/lifestyle shows to be incredibly frustrating as everything is so effortless and perfect. I can assure you there is nothing perfect about my house and garden and it takes a fair bit of effort to even achieve an imperfect state.

Despite that, I do admire the conversation generated by Gardening Australia, especially around the importance of backyard vegetable gardens and fruit orchards. Hence my desire to visit Pete’s Patch, also known as the Tasmanian Community Food Garden, at the Royal Tasmanian Botanical Gardens.

Peter Cundall was the star of Gardening Australia for nearly 20 years. His no-frills, no-fuss manner and genuine enthusiasm for growing food endeared him to viewers all over Australia. His TV backdrop and playground was a patch of dirt on the edge of the Royal Tasmanian Botanical Gardens (RTBG) which became affectionately known as Pete’s Patch. It was the highlight of every show to see what Pete was up to in his patch, what was in season, just ripe for picking.

Despite abandoning my vege patch many years ago due to a battle to the death between a River She Oak tree and myself (the tree won), I had always wanted to have my own little brush with celebrity and visit Pete’s Patch. By the time I eventually got around to visiting Tassie, Peter had long since retired and the Patch was rebranded as the Tasmanian Community Food Garden (TCFG) and Tino Carnevale replaced Peter as the enthusiastic food grower on Gardening Australia.

As I stepped through the gates of the RTBG I made a bee-line for the Food Garden. I admit that I was expecting something much larger and grander than the few garden beds and smallish terraced area. A good example of the power of television to distort perspective, I guess. Having said that it was still a pleasant space and definitely worth a visit in the context of a longer visit to the Gardens.

According to the signage the RTBG has been the site of food production for over 200 years. Originally Hangan’s Farm, the land was then incorporated into the grounds of Government House and became the vegetable gardens and orchards to feed the dignitaries.

During my visit in late February the garden beds were full of seasonal produce including: 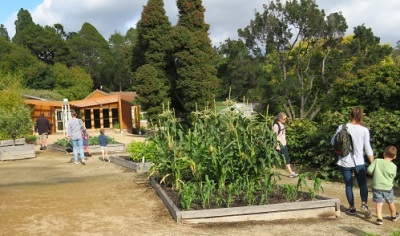 I was pleased to see a couple of Yummy Mummies walking around the garden beds showing the fruit and vegetables to their toddling sons. Nothing like developing some young green thumbs. Many of the garden beds featured companion planting with herbs and other ground covers – all labelled to educate us about what goes where. I love that these plants are both functional and beautiful.

Strolling around the vege patches I got the impression that the produce was getting towards the end of a hard, dry growing season and slightly past its prime. Compare that to the patch of edible native Tasmanian plants which looked very happy and thriving in the conditions.

The backdrop of the rusty red brick walls provided a nice contrast to the espalier pears and various trees and plants. I am not sure why this appeals to me, maybe it is something to do with the hard surfaces and strong colours vs the soft greens and irregular shapes of nature.

I found myself smiling (yes, I probably looked a little odd) at the juxtaposition of a highly manicured lawn, sweeping paths and soaring trees, and a big fat yellow marrow nestled happily in a garden bed. The elegant beauty of a meticulously maintained garden, invaded by a purely practical and functional vegetable. Love it.

I wonder how much produce is tasted by visitors or mysteriously disappears into visitor handbags and backpacks? Apparently any excess fruit and vegetable produce is supplied to local charities, so this section of the RTBG ticks many boxes.

One of the best things about the Gardening Australia TV show is that it has made growing your own food fashionable again and has also removed some of the mystique around what you can realistically grow in your own plot. They have dramatically increased knowledge levels amongst the general public and amateur gardeners alike.

If you are looking for some vege patch inspiration then I highly recommend a visit to the TCFG or dive into a few episodes of Gardening Australia. My vege garden is still a non-event, but I can appreciate and admire the prowess of Tino and his team.

As Peter Cundall used to say at the close of each TV show, “well, that’s your bloomin’ lot”.

Have you been to an edible garden? 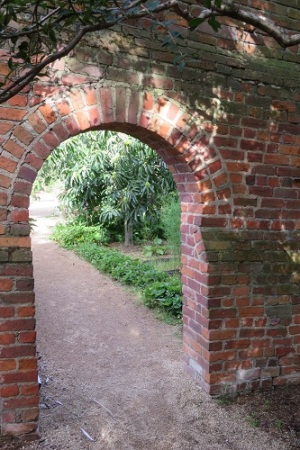 What: Peter Cundall has had a very interesting life – from starting life in Manchester in 1927, to being locked up in solitary confinement after WW2, and finally landing in Tasmania in 1955. Read about this life here.

Where: The Tasmanian Community Food Garden is located at the southern edge of the Royal Tasmanian Botanical Gardens, Hobart.

When: The Gardens are open seven days from 800am. Closing time depends on the time of year and daylight saving time – either 500pm or 630pm.

Why: To learn about/see something out of the ordinary.

How: The Royal Tasmanian Botanical Gardens are an easy stroll from the Hobart CBD, catch one of the Red Dekker buses or hire a bicycle and hit the bike paths.

Who: Access to the Food Garden is via excellent smooth, wide paths.

Related Posts: What else is there to see in the Royal Tasmanian Botanical Gardens? Have a read of my summary post here. 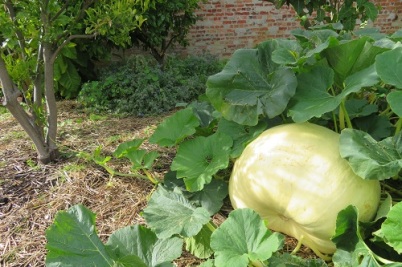 Related Blogs: For more grow-your-own inspiration, have a look at Australia’s version of the River Cottage where a professional chef turns into a farmer with some interesting results.

Read About It: Or get it straight from the horse’s mouth with Peter Cundall’s, The Practical Australian Gardener: Seasonal Tasks Using Sensible Organic Methods. Available from Book Depository.