The hum and energy in the air was palpable, as I edged my way through the crowd, to find a massive pair of eyes locked onto mine. Wherever I went, the eyes followed my every move. I simply could not escape.

Luckily for me, the eyes belonged to the Great Boudha Stupa in Kathmandu, and I was spellbound by the sight of a million brightly coloured prayer flags being whipped by the wind.

The Great Boudha Stupa is just that. GREAT. The dome is 42m high and 30m in diameter, while the whole stupa complex covers an area of around 6 756sqm. It is located about six kilometres north-east of Kathmandu’s centre, and is hard to pin down age-wise. Apparently it was first mentioned in sacred texts as far back as 400AD, but has been rebuilt, enhanced and embellished a number of times since then. It was listed on UNESCO’s World Heritage register back in 1979, and like many other temples in the Kathmandu region, suffered extensive damage during the devastating 2015 earthquake. There was no sign of damage when I visited in April this year. The dome was pristine white and everything was freshly painted and crisp.

I stood back in wonder at the size and scale of the stupa. It dominates a large square, enclosed on all sides by shops, monasteries and temples. A large walkway, about ten metres wide, separates the dome from the surrounding buildings, and this walkway acts as funnel for visitors and pilgrims.

The crowds were evenly split between local devotees and visitors, such as myself, with a healthy sprinkling of russet and golden-robed Buddhist monks and nuns. The monks and nuns walked serenely, spinning the prayer wheels with their right hands, and appeared to be mumbling prayers to themselves. They were a picture of devoutness, and seemed oblivious to us Westerners intruding on their reflections. Once their prayers were said, they huddled together and caught up on all the latest Buddhist news and gossip. A very social atmosphere.

I had to smile as I noticed that many of the monks paired the latest hi-tech sneakers with their burgundy robes. It was an amusing clash of cultures and fashion styles, but I guess they deserve and desire comfort as much as the next person.

I joined the throng, sauntering around the Stupa in a constant clockwise direction, accompanied by the slightest whirr and hum from the prayer wheels, which the multitude of hands reached out to spin. According to the information brochure, “all those who circumambulate it will acquire the seven qualities of the higher existences. Whoever makes entreaties to it will effortless accomplish the two purposes.” I don’t know about you, but I can always do with a few more qualities and more purpose.

The flow of the people and the flutter of the brilliant rainbow of flags were quite mesmerizing. I just wanted to stop, step out of the crowd, and drink it in. There wasn’t time to stop though, so I made do with a paltry attempt to capture as much as possible on my camera. Like all the other places I had visited ever-so briefly in Nepal, everywhere I turned in the square, was a stunning photo opportunity. Along with the imagery of the serene Himalayan Mountains, this majestic dome was my mental picture of what I dreamed Nepal would look like.

My wonder was tempered a little by the wall-to-wall shops that lined the walkway, tempting the devout away from the spiritual path. The Stupa has become the centre of a thriving hub of craft and business, and the shopkeepers were keen for a sale. Alongside the usual tourist trinkets, the traditional crafts, and large sacks of spices and incense, were fascinating. If only I had more of the local language, other than ‘namaste’, to be able to find out what these mysterious bags contained.

If the Stupa itself is not enough for you, there are also a range of temples and monasteries edging the square, and each of the monasteries follow a different Buddhist tradition or sect. It is possible to walk into select monasteries, listen to the chanting of the monks, and be dazzled by the ornateness of the statues and religious imagery. This stupa is actually the most important centre for Himalayan Buddhist worship and studies in the Kathmandu Valley. Hence, the bustling crowds. 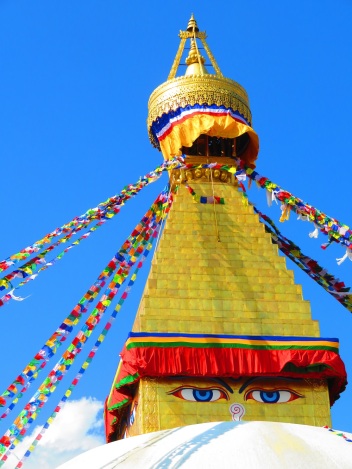 Note to the unwary: Nepal is quite a conservative society so ensure you dress appropriately and be respectful of the sacredness of the Stupa and its surrounds.

The Stupa is not just a striking building though, as each of its elements hold some sort of religious meaning for Buddhists:

It is sobering to think that one simple building can be so imposing, and represent so much.

Again I would have liked to spend more time walking and spinning, but our guide was getting anxious to collect all the stray tourists and herd us back onto the bus. I turned one last time, looked into those enigmatic eyes, and nodded my head, acknowledging that I would be back one day to continue my Nepalese education.

What is the most striking building you have seen?

What: The Stupa complex is free to enter.

Where: The Stupa is located at Boudha Bazaar, Kathmandu Municipality, Ward no. – 6, Kathmandu.

When: The Stupa complex is open every day.

Why: Go to absorb the colour and movement of an ancient religion, and a dynamic way of life.

How: I was part of a guided tour that visited the site. Information brochures are available which give a brief explanation of the Stupa, its history and the surrounding buildings.

Who: The complex is open to everyone.

Related Posts: For more chatter about amazing religious sites in Nepal, have a look at my post about the Hindu cremation site in Kathmandu.

Related Blogs: To explore Buddhism in more detail, have a look at: https://tricycle.org/trikedaily/

Read About It: for a quiet read and a detailed explanation of the Buddhist religion, check out Book Depository